The Seattle Art Fair, presented by AIG, culminated in strong sales and high public engagement with the fair’s Projects & Talks program. The fourth edition of the fair was the largest to date, with 106 exhibitors representing over 35 cities around the globe, including Berlin, Dublin,

“We are grateful to Seattle and the broader Pacific Northwest for its enthusiastic embrace of the fair, and were delighted to see so many significant out-of-town collectors attend this year. The public’s

extraordinary response to Nato Thompson’s program, coupled with tremendous support from collectors and institutions, made for a successful fourth year,” said Seattle Art Fair Director Max Fishko. “Art fairs are not only about commerce but the exchange of ideas. This past weekend, Seattle was a gracious host for both, and we are very much looking forward to next year.” 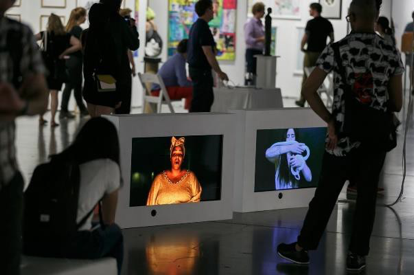 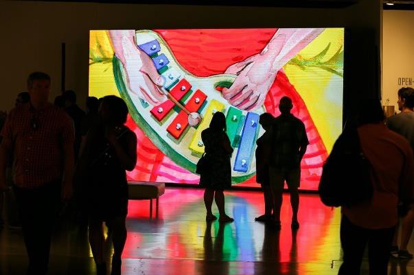 Frye Art Museum’s Director/CEO Joseph Rosa and curator Amanda Donnan selected a work by Toyin Ojih Odutola from Albuquerque’s Tamarind Institute and Ellen Lesperance from Portland-based gallery Adams and Ollman. The acquisitions were made possible by a $25,000 fund from the Seattle Art Fair in support of the museum’s new Contemporary Council.

“We are proud to expand our collection to include two incredible artists, Ellen Lesperance and Toyin Ojih Odutola, and thank the Seattle Art Fair for supporting the growth of our institution,” said Frye Art Museum Director Joe Rosa.

As part of the fair’s Projects & Talks, artist and Pee-Wee’s Playhouse set designer Wayne White created 14-foot puppets of Seattle pioneer women Mary Ann and Louisa Boren. These extraordinary, larger-than- life sculptures have been donated by the artist and Joshua Liner Gallery to the Montlake Elementary School in Seattle, where they will be on view to students and visitors indefinitely.

Seattle Art Fair Artistic Director Nato Thompson presented a diverse program of Projects & Talks, including live robot demonstrations by Mark Pauline’s Survival Research Laboratories, Heather Dewey Hagborg’s Probably Chelsea, an installation of thirty 3D portraits of Chelsea Manning that were algorithmically generated by an analysis of her DNA, and Chris Burden’s Scale Model of the Solar System. Anishinaabe artists Charlene Vickers and Maria Hupfield’s large-scale cardboard megaphones presented a performance series to remind us that Seattle, the land of the Suquamish tribe, is a place whose future is rooted in its past. Local Seattle activist and artist C. Davida Ingram presented a multimedia project reimagining the 1999 World Trade Organization protests with indigenous and black people as central players in the “The Battle of Seattle” of past, present, and future.

“Seattle continues to be a strong and relevant market for us and we are incredibly honored to have Ellen Lesperance’s work enter the Frye Art Museum’s collection through this new partnership with the fair. For artists and galleries, this is vital support and leadership in the region.” — Amy Adams, Adams and Ollman, Portland

“As with every edition of the Seattle Art Fair, we cultivated new and existing relationships. The themes in our exhibition, space exploration and the unknown, resonated with the fair’s audience— with both visitors and collectors alike. We’re creating a publication to document the exhibition.” — Lidia Andich, Gagosian

“More than a dozen people a day told us they had never seen anything like our presentation before. Our sales reflected that. We were happy to here and look forward to returning next year.” — Wahei Aoyama,

“The Seattle Art Fair was excellent for us. We sold deeply into our presentation and to collections we’re delighted to be working with. We will certainly return next year.” —Charlie James, Charlie James Gallery, Los Angeles

ACCORDING TO THE PRESS

Over 100 national press outlets covered the fair and its exhibitor highlights, including Cultured Magazine, The Art Newspaper, Architectural Digest, artnet News, Galerie Magazine, ARTnews, and GeekWire, as well as many Seattle outlets including The Seattle Times, Seattle Weekly, The Stranger, KING5, City Arts Magazine, The Seattle Met, and Seattle Magazine.

“Seattle Art Fair, back for its fourth year, has become a major event, attracting tens of thousands of people from around the world and setting the Seattle arts scene ablaze with gossip, speculation and satellite events. ”

“Like this one, most of the fair’s special projects reflect Thompson’s interest in merging art and tech in a way that feels generative rather than gimmicky. ”

“The 2018 Seattle Art Fair, which opened Thursday and runs through Sunday at CenturyLink Field Event Center, tucks all kinds of technological and science-fictional nods into the artworks from more than 100 galleries in ten countries. And you don’t have to be a collector of contemporary or modern art to appreciate them, either.”

ABOUT THE SEATTLE ART FAIR