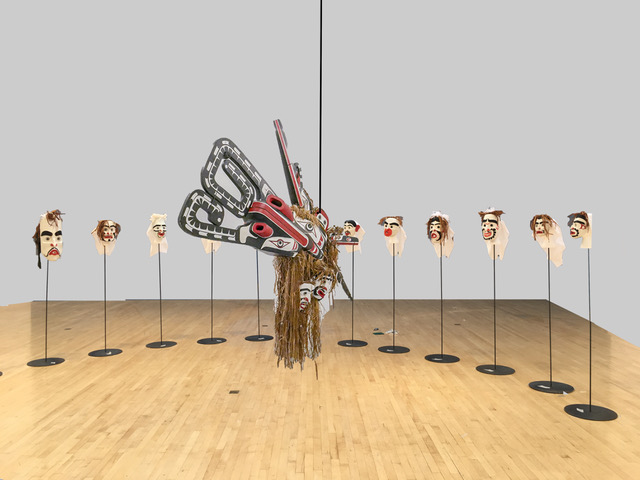 Alan Hunt (b. 1988) is of Kwakwaka’wakw and Tlingit ancestry and currently resides in Alert Bay, BC. Hunt received his chieftainship from his grandfather, Chief Alfred (Hutch) Hunt, in 2015. Hunt has also enjoyed the honor of being mentored by renowned carvers Wayne Alfred, Marcus Alfred, and Bruce Alfred.

In 2014, Hunt joined Beau Dick’s long time apprentice Cole Speck to learn under the master carver. This relationship lasted until Dick’s death in 2017. Most recently, Hunt was part of the group of apprentices who worked closely with Dick during his Artist-in-Residency at the UBC Department of Art History, Visual Art and Theory in his studio in the Audain Art Centre. It was there that Hunt and Speck assisted Dick in the completion of his exhibition for Documenta 14 (2017), which took place in Athens, Greece and Kassel, Germany. Like Beau Dick, Alan Hunt dedicates his practice to the promotion of Kwakwaka’wakw culture. Hunt carves in both Kwakwaka’wakw and Tlingit styles. Hunt enjoys collaborating on pieces and working with other artists on new projects. Hunt plans to expand his practice by utilizing different media, including metal engraving.

The Atłak’ima (Atłak’im), known also as the Dance of the Forest Spirits, is one of the four main dances performed during Kwakwaka’wakw Winter Ceremonials; it tells the story of a boy who gets lost in the woods and is visited by many guiding spirits who teach him virtues.

On February 25, 2020, a version of the Atlakim ceremony was danced on the European continent for the first time. Hereditary Chief Alan Hunt, and 12 other members of the community traveled from Alert Bay, BC, to Scotland to perform the dance who’s ownership comes from Chief William Hawkins box of treasures at University of Edinburgh in conjunction with Pine’s Eye, an international group exhibition at Talbot Rice Gallery. This iteration of the dance featured 15 new masks carved by Alan Hunt and Cole Speck and Aubrey Johnston Jr., which are on display here.