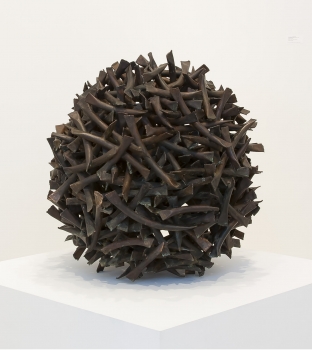 Throughout her career as an artist from the postwar period until her death in 1997, Claire Falkenstein rigorously explored media, techniques, and processes in her sculpture. Between her work in the Bay Area, Paris and New York, and finally in Los Angeles, she was involved with such art groups as Gutai in Japan and art autre in Paris.

Falkenstein is best known for her wire and glass sculpture, and her work in three dimensions, which were radical and ahead of her time. This tribute to Falkenstein includes several examples of her snarled, nested, copper and glass structures, which evoke molecular and cosmological structures.