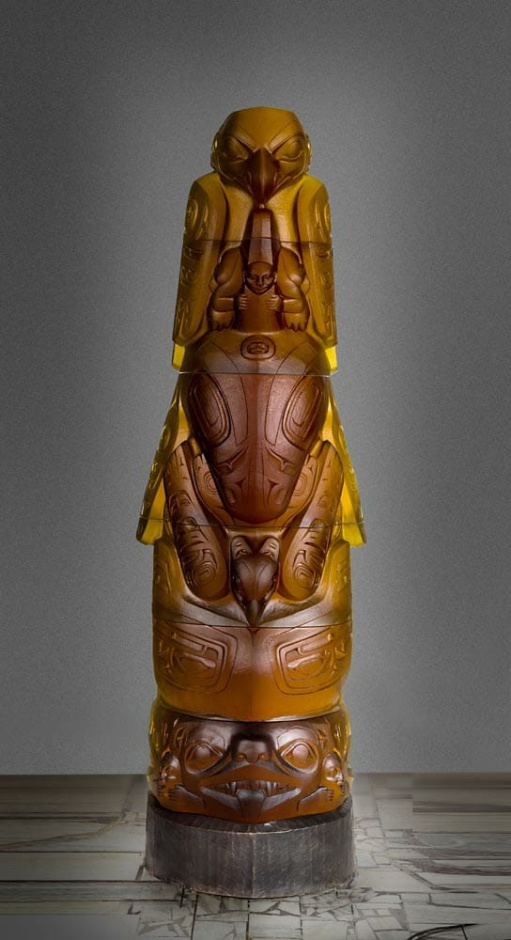 The art of Preston Singletary has become synonymous with the relationship between European glass-blowing traditions and Northwest Native art. His artworks feature themes of transformation, animal spirits, and shamanism through elegant blown glass forms and mystical sand-carved Tlingit designs.

Singletary, a Seattle native, began working in glass in local studios, working with and alongside renowned artists Benjamin Moore, Dante Marioni, Dale Chihuly, and Lino Tagliapietra. As a student and assistant, he initially focused on mastering the techniques of the European tradition. In 1993 Preston traveled to Sweden and was immersed in the Scandinavian design community. While working in Sweden, Preston met his future wife, Åsa Sandlund. Preston continued developing his glass blowing skills when he returned to Seattle and began exploring ways of representing his Tlingit heritage in his glass sculptures, giving his work new purpose and meaning. Since that time, Preston’s skill with the material of glass and traditional form line design has strengthened and evolved, allowing him to explore more fully his relationship to both his culture and chosen medium. This evolution, and subsequent commercial success, have positioned Singletary as a significant influencer of contemporary indigenous art.

Singletary maintains an active schedule by teaching, lecturing, and exhibiting internationally. In 2009, the Museum of Glass in Tacoma, WA, launched a major mid-career survey of his work, entitled “Preston Singletary: Echoes, Fire, and Shadows.” In 2018 he launched a new traveling exhibition with the Museum of Glass, titled “Preston Singletary: Raven and the Box of Daylight.” This exhibition is currently
on exhibit at the Smithsonian National Museum of the American Indian through January 2023.