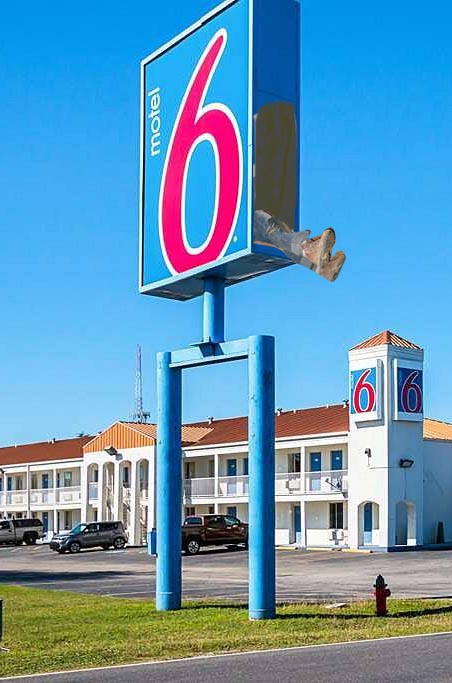 A ubiquitous presence on highways in the United States and a go-to option for affordable accommodations for frequent drivers—Motel 6 advertises itself with massive billboards. Paradoxically, the size of the billboards seem much bigger than the actual size of the rooms themselves. With this sculpture, Miguel Calderón establishes a game of correspondence between real spatial dimensions and our notion of them. The artist generates “a room” with the very same billboard advertising the motel.

Miguel Calderón is a contemporary Mexican artist who, while working through the disciplines of painting, video, photography, and sculpture, examines cultural stereotypes through both a critical artistic approach and a personal lens. Exemplified by a flippant attitude and crude aesthetic, his work features an amalgam of both fine art and pop culture references. Born on June 1, 1971 in Mexico City, Mexico, Calderón spent much of his early artistic career studying at academic institutions, attending The Cambridge School of Weston in Massachusetts before receiving his BFA in 1994 from the San Francisco Art Institute. Calderón’s paintings have gained notoriety in both the art world as well as in popular culture, notably being featured in Wes Anderson’s classic 2001 film The Royal Tenenbaums. His work has been exhibited in museums and institutions across the globe, including at the Guggenheim Museum in New York City, New York, the Museum of Natural History in Mexico City, and in the São Paulo Biennale in Brazil. The artist continues to live and work in Mexico City, Mexico.